No pictures this time, just a reference to pages on another site;-

which show some of the colourized postcards featuring the Maine Two Footers,

Enjoy if you visit, 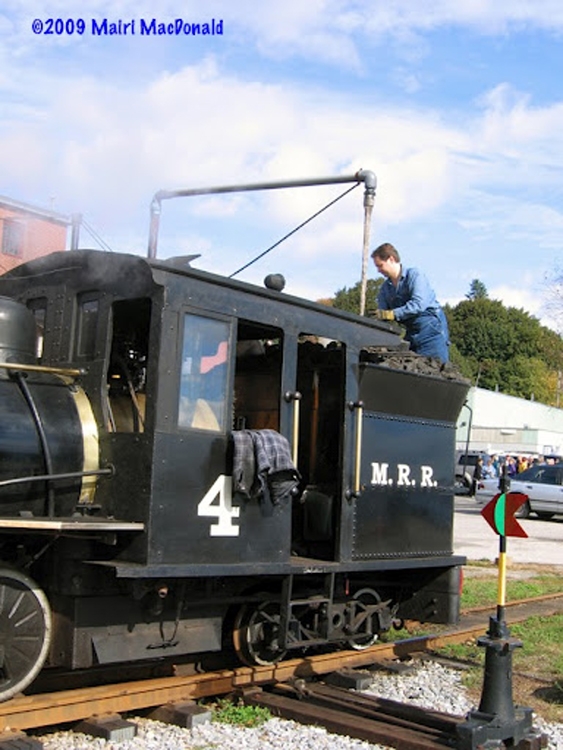 FAQ editor Trevor Marshall filling the tank on Monson Railroad 4 at the Maine Narrow Gauge Railroad Company and Museum in Portland, Maine in 2009 – using the water crane he financed and helped build.

In July 2014 Trevor told the story of he and his friend Pierre Oliver built a functioning full size water crane for the Museum. Click here for the full story.

Enjoy if you visit,

Gary Kohler reported evidence another semaphore signal located about 800 feet south of Strong station. According to the SR&RL Road Completion Reports, it was installed about 1922. M2FQlist msg2087

The recent discussion concerning the SR&RL rulebook in THE MAINE SCENIC ROUTE motivated me to pull out my copy and reread the whole book. It has been too many years since I read one of my original sources of inspiration. This reading gave me a couple of ideas I’d like to bounce off the list.

I found the rules of the ball signal at Strong quite interesting. There are two sets of rules; one for three balls in the supplement at the beginning of the rulebook and one for two balls in the original 1908 text. I have been researching the Strong yard during the teens for my in-progress layout design. One elusive date is when the ball signal was moved from the freight-house side to the junction side of the station. Also all of the pictures I’ve seen show two balls on the freight-house side and three balls on the junction side. If you have Gary Kohler’s photo CD’s, and you should, there is an excellent photo of a passenger train at Strong pulled by #9. (Link to Gary’s website now available from Home Page) The ball signal is between the station and freight house and has two balls. The picture had to have been taken sometime after September of 1912 since RPO #6 is in the train and it wasn’t delivered until that date. So the ball signal was there at least until that date.

Now let’s turn to the collision between #7 and #16 in Strong in 1916.  The accident is described in both THE MAINE SCENIC ROUTE and volume 2 of TWO FOOT BETWEEN THE RAILS with some variations between the stories. Crittenden lists the date as July 7th while Jones say July 8th. Crittenden describes the events with the ball signal using the two ball procedure listed in the original rulebook. Jones describes the three ball signal system as changed in the supplement. The detail I never noticed before was the date supplement #1 was issued, July 16, 1916. This leads me to believe Crittenden’s version of the accident concerning the ball signal since the new three ball system went into effect eight to nine days after the accident. It also makes me believe the third ball was definitely added and possibly the whole signal moved that July as a result of the accident.

I know this sounds like nitpicking to many but I use details like this to help narrow the date of other photographs and pinpoint other changes on the railroad.  Any photos or information helping to prove or deny this idea would be greatly appreciated. Has anyone seen a photo with three balls on the freight-house side or two balls on the junction side?