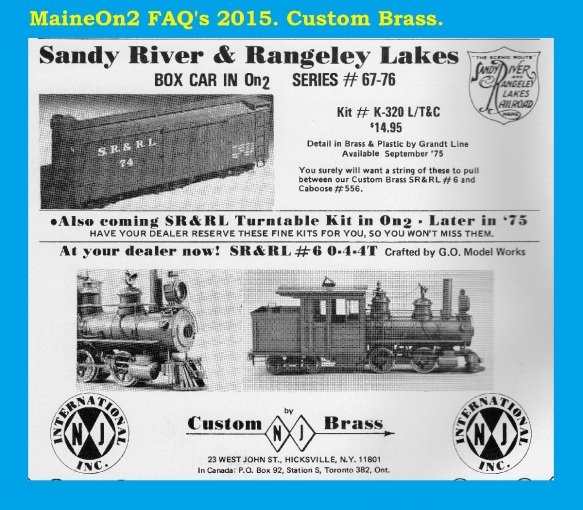 Custom Brass announced their wooden craftsman style boxcar kit with their advertisement in the September/October 1975 edition of the NG&SL Gazette.

The Custom Brass SR&RL #67 Boxcar kit was typical of what was called “a craftsman style kit”, meaning that compared to today’s (2016) kits, significant cutting, trimming and use of tools to fit details was expected.

The picture above shows the construction style well. The wooden pieces in the upper right are a milled floor (with integral side, intermediate and centre sills), the shaped sub-roof piece and two end blocks. These formed the basic body to which scribed side and end sheathing was applied, followed by plain sheeting for the roof and then strip-wood for fascia’s, ladders and roof walks. 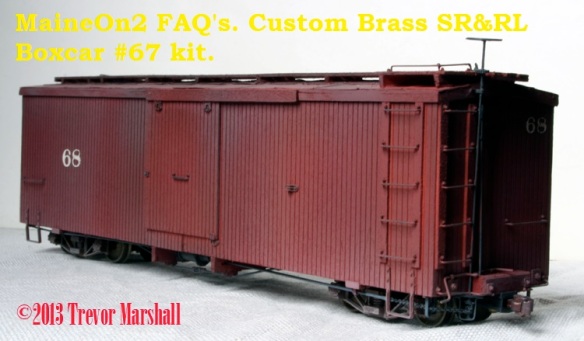 In June 2007 Trevor Marshall posted the following message to the On2 Yahoo! group;-

Yes, it’s true. Until today, my On2 railroad had ONE boxcar – a Sandy River Car Shops kit built by a friend and acquired when he sold off his On2 equipment. I’ve just been too busy building flat cars for the slate quarry.

However, I decided to do something different – one can only build so many flat cars in a row, after all – so a while ago I started work on an NJ International wooden kit (acquired from another friend who was selling off his On2 equipment… hmm: I see a pattern!). The kit was for SR&RL boxcars 67-76, which were 28-foot cars. I modeled it as Somerset & Piscataquis Counties #68.

This was an interesting experience.

The kit included all the basics, but was missing information like how to route brake rods and pipes, and many details like the dozens of NBWs used on grab irons, etc. Plus, of course, a tin roof made of individual panels of thick embossing tin.

I’ve posted a few photos in the TPM-Projects folder in the photos section of the web site. Editors’ note the pictures are shown below.

It’s “finished”, although I’m waiting for some air hoses to add to the ends. The S&PCRR now has TWO boxcars!

Custom Brass announced their wooden turntable kit in the January/February 1976 issue of the NG&SL Gazette;- 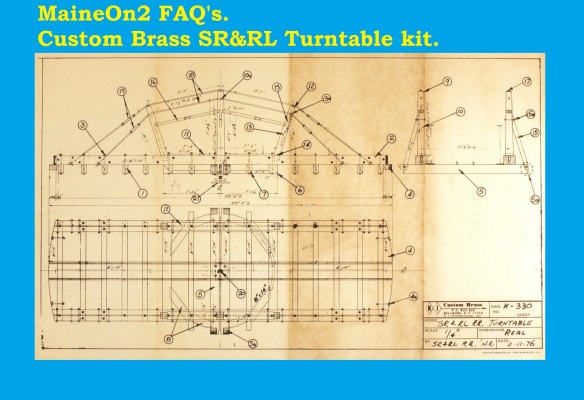 Madruga Models had a brief existence in 1980 only.

I recently acquired two craftsman kits for Sandy River flangers, offered by a company called Madruga Model Works. The photos of the finished models that accompany the kits are stamped on the back as being printed in February and June 1980.

Here’s some more detail: Madruga Model Works was owned by Bernie Lewis and the address on the box is a PO box in Miltipas CA.

The 503 comes with two sheets of plans – one by RH Werner, the other by JE Robinson, based on measurements taken in 1968 by RW Brown and additional data from E Bond. It looks like Bernie Lewis did 55 kits for 503.

The 505 includes one sheet of plans by RH Werner, and 50 kits were produced.

The kits each consist of a Grandt Line details, plus white metal castings for journals and the flanger blades that MIGHT be Portland products, or might be MMW’s own castings (does anybody know?), plus strip and sheet wood in little baggies.

Does anybody know more about Madruga Model Works, or any of the gents mentioned? I thought it might be a good topic for discussion and possibly help record the story of Maine two-foot modeling in O scale. – Trevor

PS: Bernie sounds like quite the guy. His first page of instructions reads, in part: “I realize that most On2 modelers are accomplished scratchbuilders; however, instructions are included to demonstrate my method of construction. If all else fails, you might want to give these methods a try.”

and Bob Schlechter replied to Trevor;-

Very interesting that you came across both Madruga kits by Bernie.

Those were the only two kits that Bernie produced. Very nice kits even going back 28 years ago. Further kit production ceased due to a divorce! Bernie is a good friend from the past when we both lived in and around the San Francisco bay area and he now resides in Vermont. He, to the best of my knowledge, quit model railroading and does bird/duck carving. Has a Ph.D. in mathematics and has a very good sense of humor.

Bernie and I did On2 modules depicting the Kennebec Central RR. I did Randolph and he did Togus. They were displayed at a NMRA show in San Mateo, California many years ago. I still have my diorama as I tend not to throw things away! Just ask my wife.

R.H. Werner, Bob of Hobby Barn fame also a friend from the past who now resides in Arizona. Would love to see his Portland Products line reissued.

J.E Robinson, John is also a friend and resides between Colorado and a ranch in Texas, He still does model railroading but enjoys his full size two foot RR on his Texas ranch. Talked with him at the 2008 NNGC.

R.W. Brown , Bob, is the founder, owner and editor of the Gazette magazine. Bob and I have been friends for the last forty plus years. He is still very active in model railroading in Los Altos, California. Also talked with him at the 2008 NNGC.

Bond, Ed, also a friend for some time is credited with many of the prototype two foot photos that we all use and enjoy. He was collecting prototype railroad photos since he was a teenager. He is active in 7 1/2″ gauge live steam in Georgia. Had a pleasant visit with him a few months ago.

I’ve known all of the Grandt family for the past 45 years. Dave still runs the business and Robb publishes a line of books pertaining to Colorado railroads. Met with both at the 2008 NNGC.

Does the above suffice or is more needed? 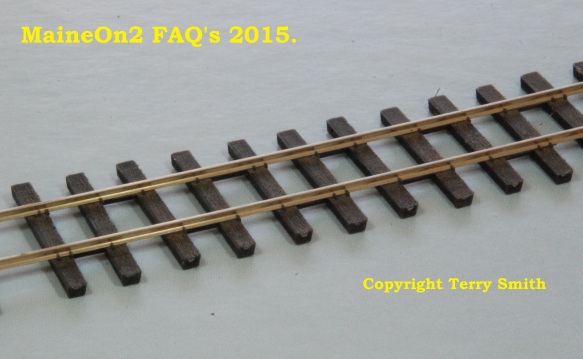 Precision Scale introduced its On2 flex track in one yard lengths in mid-1983.

The track consists of an injection moulded tie (sleeper) base strip of 21 ties of random irregular lengths with moulded spike heads holding nickel silver code 70 rails. The track gauge typically ranges between .508″ to .512″ on measured samples.

This deliberately foreshortened view of the track clearly shows the irregular tie ends. The yellow arrows show the length of one of the tie strips. The dimension from the inside edge of the bottom of the rail to the outside of the tie varies from .377″ to .419″ on one side and from .374″ to .422″ on the other.

This underneath view shows the single bars connecting adjacent ties. Experience has shown that care needs to be taken when laying this track to ensure that the ties are as perpendicular to the rail as possible, and not angled, to avoid reducing the gauge of the rails. This is especially important on curves, and when running the larger Forney type locomotives.

The Toy and Hobby House Scale Railroad Division announced their exclusive supply of the Town Models produced SR&RL coach #19/20 with this advert placed in the March/April1976 edition of the Narrow Gauge & Short Line Gazette.

We believe that Town Models was a trading name used by Darryl Townsend when he moved from New England to the Chicago area. Previously Darryl had worked with Lee Snover Snr. on items released under the Leetown name.

We also believe that Town Models produced 50 pieces each of three brass models in 1976 before disappearing from the scene;- SR&RL Coach 19-20, SR&RL Combine 15 and SR&RL boxcar 147 which was offered for sale directly complete with SRE trucks.

The Narrow Gauge & Short Line Gazette advert is reproduced here by permission of Bob Brown, Editor and Owner of the Gazette. http://www.ngslgazette.com/ 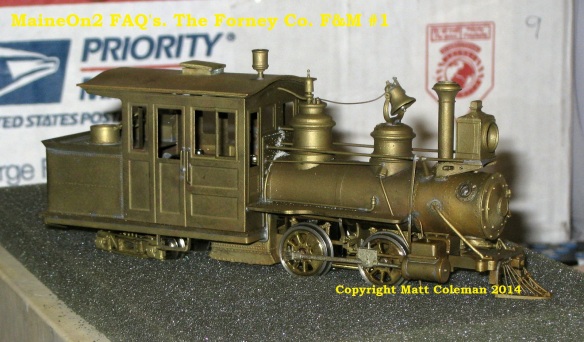 This information sheet supplied with the model makes it clear that the model is based on the F&M #1 despite the box being labelled as F&M #2/#3.

The nicely finished model shown below was offered for sale some time back. In this case, the box correctly describes the model as F&M #1/#2, but the spelling of Forney is incorrect. 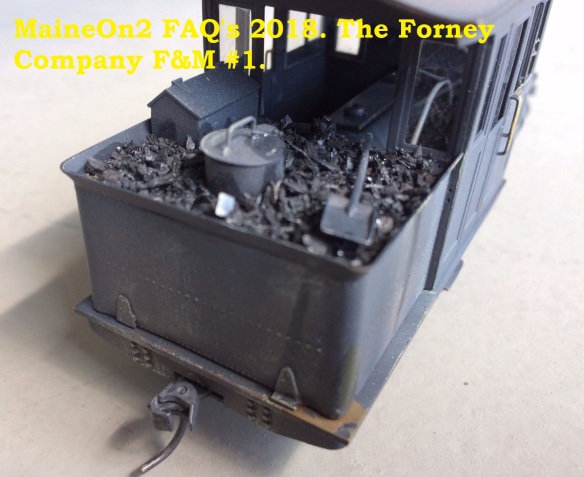 This view inside the cab with the roof removed shows the unique drive arrangement for The Forney Company models, where the can motor is tied to the top of the gearbox by a fairly substantial brass strap with two screws, and it is just possible to see the flywheel at the front of the motor. Interested viewers should compare this view to that of the related Portland Products F&M #1 which has different drive arrangements. Click here to view.

Editors note, 30 -11-2014: this new post needs additional work, but is presented here for the sake of the new pictures and to promote further discussion and information. Please bear with us while changes are being considered and carried out. Updated 15(2)-01-2015.

And the red Portland Products box……….. 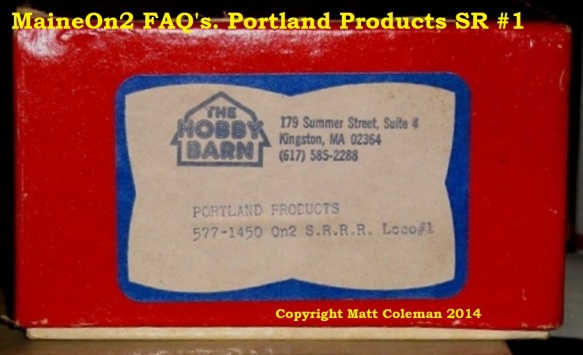 The prototype locomotive was built by Hinkley in 1877 as their works #1251 for the Billerica & Bedford Railroad “Ariel” as a strict cab forward Forney design, and also served as;-

Rebuilt in 1882 with longer wheelbase, larger cab and water tank.

The Maine On2 FAQ
Create a free website or blog at WordPress.com.