15-10-2016:  this new topic is undergoing revisions and updating (already!), thanks to a couple of people who have sent in additional information and PICTURES!. The quality of some pictures shown here may be “marginal”, but the editors believe that a marginal picture is better than none. If you are in a position to send better and/or different pictures then please get in contact.

Update received 14-10-2016 from Frank Pearsall: Slim Gauge Productions was Ron Hildebrand. And yes, he was good friends with Russ Simpson so he had a lot of work done by Russ. Ron later had “The Structure Company” in the 1980s. Produced some really neat buildings. He was a first-rate photographer and also had that kind of business.

Slim Gauge Productions as a kit manufacturer is yet another enigmatic concern from the 1970’s whose previous existence is flagged up very occasionally when one of their kits appears on eBay. 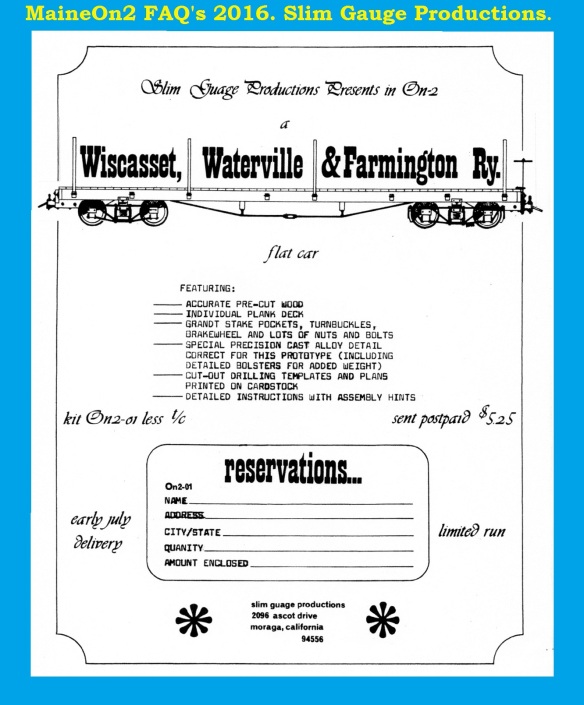 Slim Gauge Productions appears to have started trading in May 1970 with it’s first advert in Finelines of the same month (above) and its kits were available new until the  end of 1978. From a July 1971 advert, it appears that Slim Gauge Productions was started by a professional photographer using contractors (possibly Russ Simpson) to cut scale wood to exact prototypical dimensions and Grandt Line to supply injection moulded hardware. The initial offering was an On2 Wiscasset flatcar, and additional On2 items offered (eventually) included a 26 foot Bridgton boxcar #45-51 (January 1971), SR&RL Caboose #556 and SR&RL Stockcar #490 (both March 1977). Various On3 items were also produced.

The history of Slim Gauge Productions appears intertwined with Russ Simpson, as from September 1975 he advertises the former SGP kits in his own adverts, and introduces the SR&RL Caboose #556 and SR&RL Stockcar #490 kits in March 1977. An announcement in the Narrow Gauge & Shortline Gazette states that “Simpson is to stop production of the entire Slim Gauge Productions kit line, due to the pressure of outside interests”.

A poor photograph of the WW&FR flat car kit box – please let us know if you can provide better photographs of any SGP kits!

An individual kit of the Wiscasset #118 Flatcar.

Part of the instruction sheet for the version of the kit produced by Russ Simpson, in which he acknowledges the original SGP owner, Ron Hildebrand, and the various other modellers who helped develop the kit, including Bob Brown, Gordon Cannon, John Derr, Bob Schlechter and Russ Simpson.

The kit was typical of many 70’s era craftsman style wooden kits, containing a collection of stripwood plus details from injection moulded plastic, lost wax brass and brass wire. Also notable are the mentions of other suppliers in the boxed text on the instruction leaflet shown at the bottom right corner of the picture above. These include Scale Railway Equipment, Leetown Model Service, Ric Collins, Coronado Scale Models, Simpson (trackwork) and a big plug for Bob Brown’s Finelines magazine.

This advert from Finelines of July 1970 announces a last run of WW&FR flatcar and shows the new Grandt Line On2 wheelsets.

This advert from Finelines of November 1970 introduces the 26 foot Bridgton boxcar kit and indicates that the run will be limited to 100 pieces.

This very fancy advert from Finelines of January 1971 announces that the 26 foot Bridgton boxcar kit will be available shortly and that the run will now be limited to just 50 pieces.

An individual kit of the Bridgton  #47 Boxcar.

The plan showing through the kit bag.

This advert from Finelines of July 1971 gives some information about SGP and how it operated.

This advert from the Narrow Gauge & Shortline Gazette of September 1975 by Simpson lists the former SGP kits.

This advert from the Narrow Gauge & Shortline Gazette of March 1977 by Simpson introduces the SR&RL Caboose #556 and SR&RL Stockcar #490 kits.

All adverts from Finelines and the Narrow Gauge & Shortline Gazette appear by kind permission of Bob Brown, Editor and Co-owner.