Note that Sandy River Car Shops is not a current supplier. 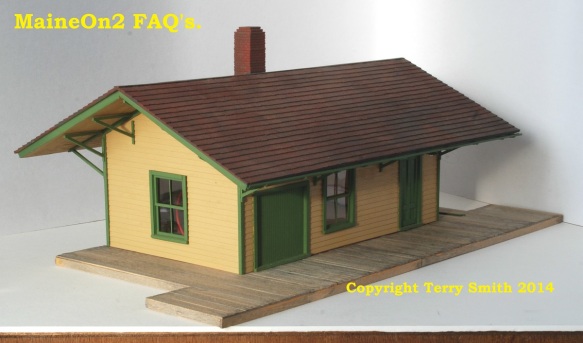 Two views of Terry Smith’s model of the Wiscasset station at Week’s Mills built from an SRCS kit, with modifications.

Sandy River Car Shops was the brand name chosen by Peter Barney to market a wide range of craftsman style kits of Maine Two Foot Railroad items,  in On2, HOn2 and Sn2. Sandy River Car Shops is frequently reduced to SRCS. The line was started sometime in the Spring of 1976, which coincided with the arrival of the Custom Brass SR&RL #6 locomotive. As far as we know (confirmation required) Peter Barney sold the commercial rights to SRCS and the line of kits to Steven Boothroyd of Cranberry Junction Hobbies sometime in the late 1990’s, who has since ceased advertising, but very occasionally lists items from the line on eBay.

The line included both a standard range of products such as regular rolling and structure kits and other items produced as limited editions.

For many On2 modellers, SRCS kits provided an introduction to and the backbone of their Maine On2 modelling. Unmade kits are often traded between members of the Yahoo! groups or more openly on eBay.

We hope that our readers will help to develop and flesh out this post advising us of items not shown on our list and even better sending us photographs of their completed kits to illustrate the extensive range available.

A part built view of a typical SRCS boxcar, in this case a WW&FR 28 foot boxcar from the 67 series, showing the familiar SRCS white box used for most kits plus the stripwood and hardware still to be fitted. 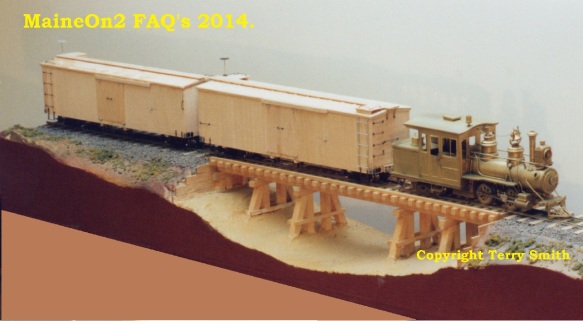 Two pictures showing boxcars assembled from SRCS kits prior to painting, allowing the various pieces and added detail to be seen more clearly. 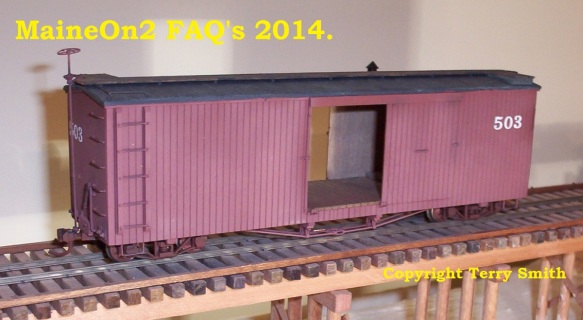 A Wiscasset #503 28 foot boxcar built from an SRCS kit by Terry Smith. 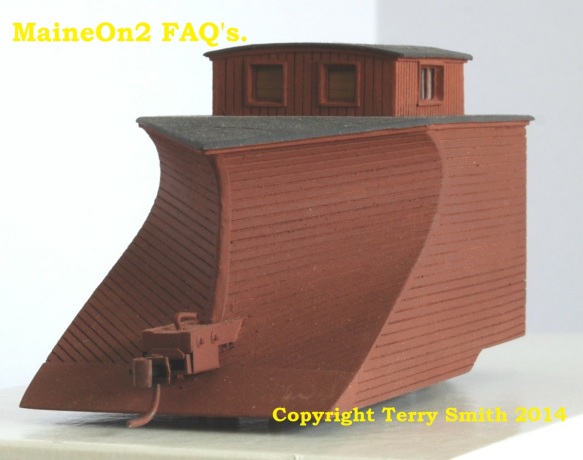 Two views of SR&RL Snowplow # 513 built from an SRCS kit by Terry Smith.

26-08-2016: this topic has been substantially revised and re-organised with additional pictures and content. We have also removed errors and information previously posted which could not be corroborated from original and contemporary sources. No further changes are planned for the moment.

Note that the models and the “classic history” date from the 1970’s and 1980’s, and they should be judged accordingly.

It should not be surprising if more recent research shows up discrepancies.

16-01-2016: Rick Uskert has revealed a previously unknown contemporary reliable eyewitness statement of the colour of the first Bridgton oil tank in 1908 here and a different official number here. Terry Smith found a reference that building work on the oil tank farm in Bridgton started in 1901, which may infer that the first tank car appeared earlier than previously suggested.

Until further notice, any references to the prototypes should be considered as subject to confirmation. However for simplicity and consistency with the models produced the text below refers to the “classic” history of these cars.

The Bridgton line was the only Maine Two Footer to actually run tank cars.

The picture above shows models of the larger #14/#21 tank on the left coupled to the smaller #22 tank on the right.

The “classically understood” story is that there were two tanks, of different sizes, ages and construction. The first tank was larger, being five feet in diameter and was constructed from sheets rolled to a ring and then joined end to end. It has prominent circumferential rows of rivets and short staggered longitudinal seams (also riveted). The ends of this tank were dished (convex). This tank was mounted on 30 foot flat cars, initially on 21 from its arrival around 1903-5 until 1921, and from then on flat car 14.

The un-mounted tank #14/21 lying around in the Portland Yard.

Showing the circumferential and axial rows of rivets. 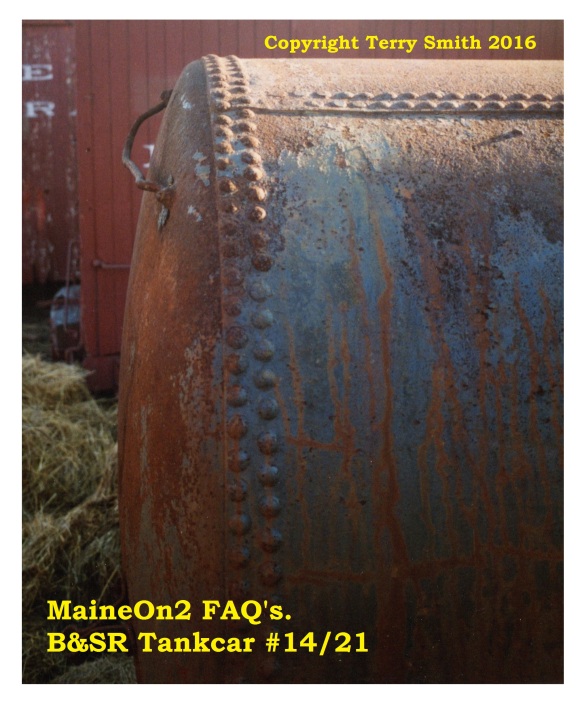 The “classically understood” story continues;- in the early 1920’s, the Bridgton line acquired an extra tank to cope with increasing fuel shipments. This smaller tank was four feet six inches in diameter, consisting of plates rolled across their length and joined longitudinally, thereby having no circumferential rows of rivets except where the tank ends were joined. The ends of this tank were flat. It was mounted on 28 foot flat car #22. Both prototype tanks survived the scrapping of the Bridgton line and were transferred to Edaville and then Portland. 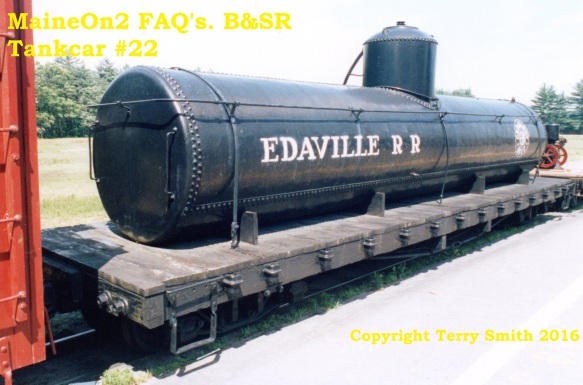 The smaller #22 tank was used at Edaville for weed control and featured in the freight trains run on the “Rail Fan Fayre” days. Note the flat end.

This picture taken at Portland shows some of the piping added for weed control and the longitudinal rows of rivets.

Close up of the dome and ladder at Portland.

The B&SR tank cars were never painted black!  The earliest known photo (1905) clearly shows gray or silver tank on a standard flat car (the B&SR used Princes Brown (Red Oxide my guess)).  All later photos, including about a half a dozen color images clearly show silver/gray tanks with the SOCONY in black.  The Moody photo in question(*) that has caused everyone to jump on the “black” band wagon was taken in shadow and appears black due to all the rust! Color photos taken the same year show silver/gray tanks.

This particular statement has led to a number of threads over the years on the Maine On2 Yahoo! group seeking confirmation or corroborative evidence to no avail. It is suggested that any interested parties review the threads starting with messages #14341, #14311 & #9626 and draw their own conclusions.

When the latest question “what colours should I paint my tankcar?” was last posed to the Yahoo! group in 2015, the most informed reply was written by Bob Schlechter and is copied here;-

I studied the potential colors of the B&SR RR tank cars #21 and 22. In later years they were likely repainted silver/aluminum or black (Edaville) at some date. Early photos in their prime (B&SR/B&HR) is not silver but likely the Standard Oil light warm gray.

See photo bottom of page 234 in Jones’ “Two Feet to the Lakes”. Those tank cars are not silver or black and lettering isn’t black either but likely Standard Oil’s blue.”

1/. the Bridgton Line frequently re-painted its rolling stock (one suggestion is annually) and that the line was also partial to buying “end of season” bargains with additional tinting colours. Discovering such practises may help to explain the differences observed in the various hues of grey captured by the contemporary black and white photography.

3/. Rick Uskert also discovered that the B&SR recorded the tank car number as #22 for the period from 1914 to 1918, whereas the “classical story” would suggest that the number should be #21. See Rick Uskert’s “Equipment Register.” Click here to view on another page.

This topic and the debates that it generated caused Bill Kerr to comment a few years ago “It is as with most things, publish, and new information will come to light contradicting your research. The listing is not meant as negative reflection on the great work Peter, Gary and others have done for the Maine Two Footers.

07-08-2016: Note this table is still a work in progress – suggestions for updates and changes welcomed! 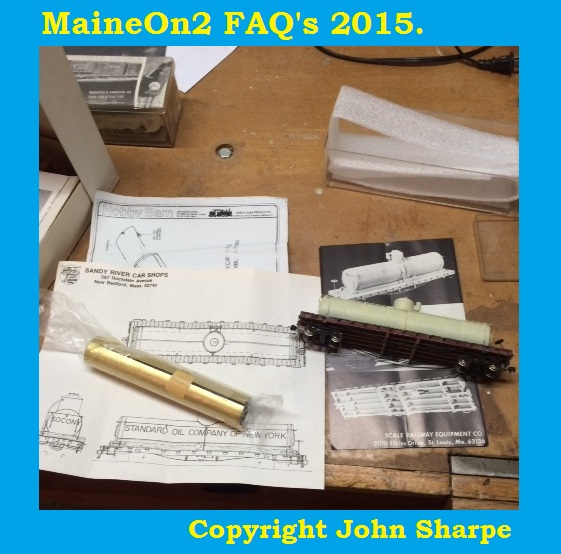 A Sandy River Car Shops kit for tankcar #22 showing the rolled tank car body and instructions and the SRE model of tankcar #14/#21.

SRCS offered models of both B&SR tank cars as limited run kits (50 units each). The kits were first advertised in the July/August 1981 edition of the Narrow Gauge & Short Line Gazette.

Several views showing the typical SRCS flat car pile of sticks with fittings in a poly bag plus the Portland Products rolled tank etchings, dome and an end. 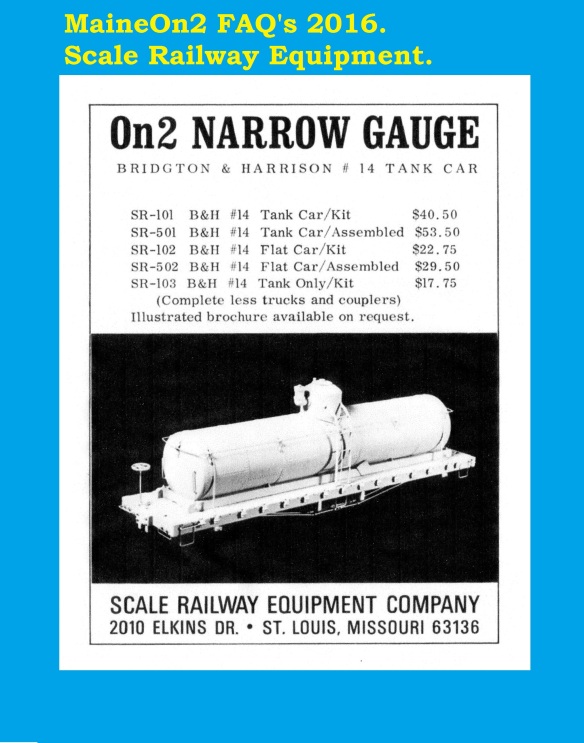 SRE advert from the November 1972 edition of Finelines magazine showing the variations available for the large tank (car).

The tank was an epoxy resin casting produced by Bill Clouser using his “Customcast” process, and included the dome, with a separate casting for the cradle. Details such as the filler cap, relief valve, handrail supports, ladder were investment cast brass. Handrails, bridle and grab irons were brass wire. As shown in the advert above, the tank was available separately or with a cast 30 foot flat car body. The model was introduced around 1972/73 and was reviewed in Railroad Model Craftsman June 1974 edition with corrected photographs in the July 1974 edition. 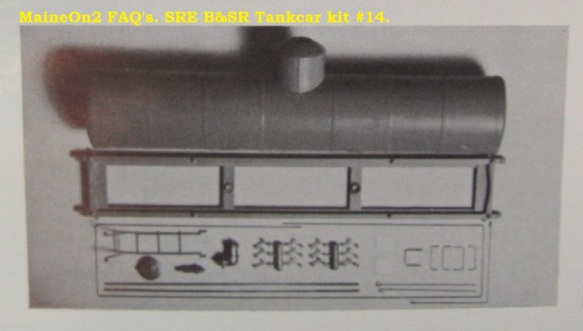 Parts of the tank only kit, taken from the instruction sheet. 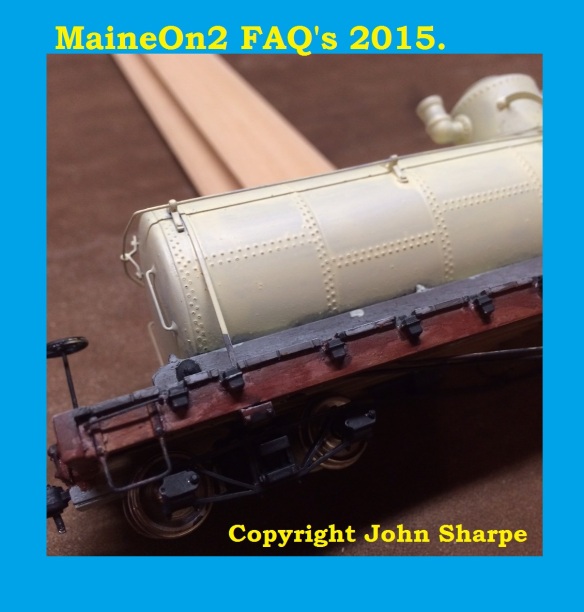 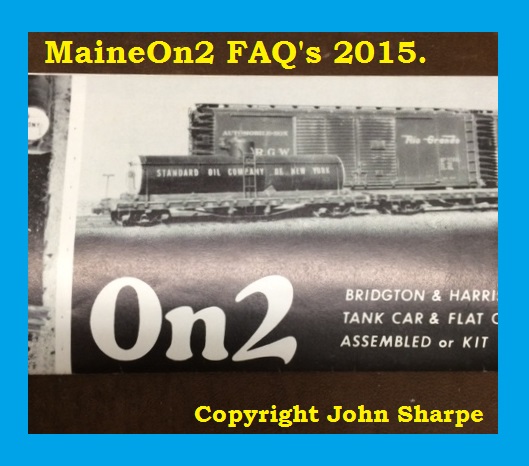 Picture of a finished model in the SRE instructions – note the colour scheme.

LeeTown Model Service announced their Bridgton Tank models (note completed tanks only) with this advert in the September 1971 edition of Finelines magazine. Component parts had been advertised during the preceding year as they became available.

Note that the phrase “a new process etched tank” in the above advert is believed to refer to the basic tank body being a brass tube that was etched in the round. It is also believed that LeeTown used the same sized brass tube for both the smaller #22 tank and the larger #14 tank, resulting in the #14 tank appearing undersized. 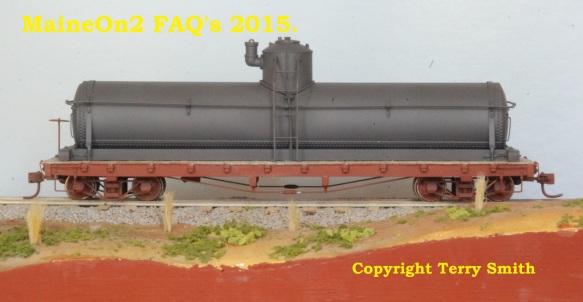 This model of B&SR/B&HR tank #22 was acquired second-hand from Wes Ewell via Bob Werner of The Hobby Barn. Wes has stated that he received this model as part payment for drawings and catalog illustrations that he did for Lee Snover of LeeTown around 1970. Given that date, the flat car that the tank is mounted on would have been scratch built.

This model of B&SR/B&HR tank #21/#14 consists of a Leetown etched “in the round” brass tube tank, (obtained as raw etched brass tube from Bob Werner of the Hobbybarn) which was expanded to the correct diameter and finished off with Portland Products tank ends, dome, safety valve, necklace, ladder and handrail supports. It was mounted on a flat car built from an SRCS 30 foot B&SR flatcar kit with a scratch built cradle and straps.

Click here to visit the Portland Products parts posting. The tank car parts are shown on the 9th page down.